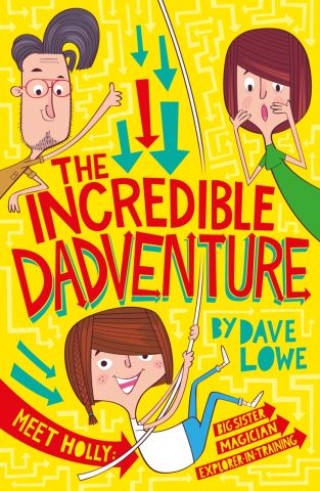 Holly's dad is an explorer, having amazing adventures all over the world, while Holly is stuck at home with her mum, her baby brother and the dog. Now Dad's on a new expedition and he'll miss her tenth birthday. She's not happy - until she finds out that he's planned a special treasure hunt, just for her. She has ten days to complete ten tasks - some silly, some tricky and some downright terrifying.

Maybe life at home isn't quite so boring after all.

The first story in the 'Dadventure' series, a perfect family story or read-alone for fans of David Baddiel and THE 13-STOREY TREEHOUSE.

Dave Lowe: Dave Lowe grew up in Dudley in the West Midlands, and now lives in Brisbane, Australia, with his wife and two daughters. He spends his days writing books, drinking lots of tea, and treading on Lego that his daughters have left lying around. Dave is the author of the successful MY HAMSTER series. His STINKY AND JINKS books follow the adventures of a nine-year-old boy called Ben, and Stinky, Ben's genius pet hamster. (When Dave was younger, he had a pet hamster too. Unlike Stinky, however, Dave's hamster didn't often help him with his homework.) Find Dave online at @daveloweauthor or www.davelowebooks.comBorn in York in the late 1970s, The Boy Fitz Hammond now lives in Edinburgh with his wife and their two sons. A freelance illustrator for well over a decade, he loves to draw in a variety of styles, allowing him to work on a range of projects across all media. Find him online at www.nbillustration.co.uk/the-boy-fitz-hammond or on Twitter @tbfhDotCom.