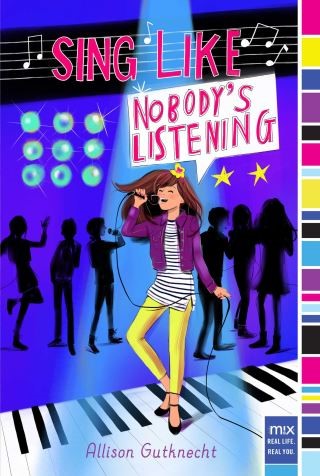 In the tradition of Pitch Perfect, two best friends battle it out for a capella group supremacy in this hilarious M!X novel.

Wylie Tennyson and Jada Emmett have been best friends forever. They have done everything together for so long that when Jada decides to try out for their middle school’s spring musical production, it was only natural for Wylie to audition as well. After all, how fun would it be to be in the chorus together? The only problem is that Jada has her sights set on much more than the chorus—she’s going after one of the lead parts, and wants Wylie to step aside to give her a better shot.

Taking a cue from her new favorite television show, Non-Instrumental, Wylie decides to start her middle school’s very first a cappella group. She wants to show Jada that it’s much better to be part of a team’s success than it is to stand under the spotlight alone. This is a great idea, in theory, until Wylie has trouble actually recruiting anyone to join her group. And it doesn’t help when Jada decides to form her own…

Can Jada and Wylie find a way to fix things before their battle for vocal supremacy destroys their forever friendship for good?

Allison Gutknecht: Allison Gutknecht grew up in Voorhees, New Jersey, with three fewer siblings than Mandy Berr. After graduating from the University of Pennsylvania, she earned her Master’s degree in Children’s Media and Literature from NYU. Allison lives in New York City with her rambunctious toy poodle, Gypsy, and her literate cat, Folly. She is a massive fan of polka dots.