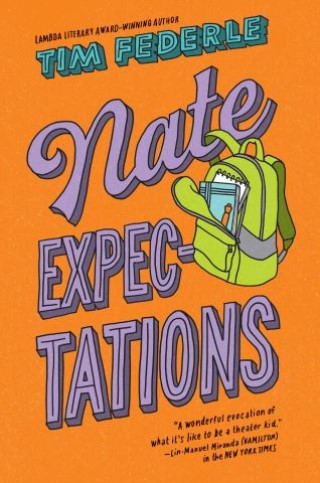 “The Nate series by Tim Federle is a wonderful evocation of what it’s like to be a theater kid. Highly recommended.” —Lin-Manuel Miranda, star and creator of the musical, Hamilton
“An exceptional swan song for a beloved character.” —Kirkus Reviews (starred review)

When the news hits that E.T.: The Musical wasn’t nominated for a single Tony Award—not one!—the show closes, leaving Nate both out of luck and out of a job. And while Nate’s cast mates are eager to move on (the boy he understudies already landed a role on a TV show!), Nate knows it’s back to square one, also known as Jankburg, Pennsylvania. Where horror (read: high school) awaits.

Desperate to turn his life from flop to fabulous, Nate takes on a huge freshman English project with his BFF, Libby: he’s going to make a musical out of Charles Dickens’s Great Expectations. (What could possibly go…right?) But when Nate’s New York crush ghosts him, and his grades start to slip, he finds the only thing harder than being on Broadway is being a freshman — especially when you’ve got a secret you’re desperate to sing out about.

This magical conclusion to Tim Federle’s beloved Nate series is a love letter to theater kids young and not-so-young—and for anyone who ever wondered if they could truly go home again. Especially when doing so means facing everything you thought you’d left behind.

Tim Federle: Tim Federle is “a prolific scribe whose breezy wit isn’t bound to a single genre” (Huffington Post). Tim’s award-winning novels include The New York Times Notable Books The Great American Whatever and the Nate series—which Lin-Manuel Miranda called “a wonderful evocation of what it’s like to be a theater kid.” Tim cowrote both the Tony-nominated Broadway musical Tuck Everlasting, and the Golden Globe and Oscar–nominated Best Animated Feature Ferdinand, starring John Cena and Kate McKinnon. A native of San Francisco who grew up in Pittsburgh, Tim now divides his time between New York and the internet (@TimFederle).