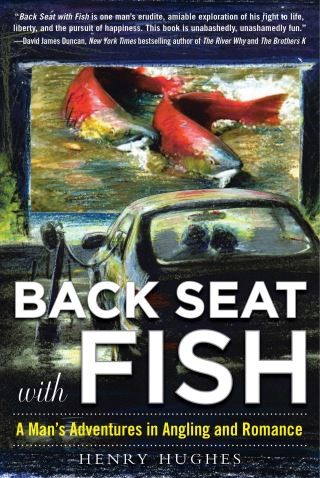 Back Seat with Fish

A Man's Adventures in Angling and Romance

Henry Hughes has been fishing his entire life. But unlike those who stick to their local stream, Hughes has traveled the world in search of new and exciting adventures.

Back Seat with Fish is unlike any memoir you’ve ever read. Traveling across East Asiafrom Beijing to Bangkokas well as throughout the United States, Hughes shares stories of the fish he’s caught and the people he’s met.

Fishing is a sport that crosses boundaries of race, ethnicity, gender, and class. In his travels, Hughes learns lessons on issues of race and culture as he interacts with a wide variety of people who share his love for fishing and enjoy the sensual connection between the salty pleasures and tensions of human and fish life.

Throughout the adventures in Back Seat with Fish are tales with carp and fugu, sharks and snakeheads, as well as exchanges with a variety of people, including a Sioux Indian from South Dakota, an elderly African American on the Mississippi, and waterside inhabitants of Beijing. But Hughes’s journey isn’t just for people who fish or love nature. Back Seat with Fish is for anyone who enjoys a good story.

Skyhorse Publishing is proud to publish a broad range of books for fishermen. Our books for anglers include titles that focus on fly fishing, bait fishing, fly-casting, spin casting, deep sea fishing, and surf fishing. Our books offer both practical advice on tackle, techniques, knots, and more, as well as lyrical prose on fishing for bass, trout, salmon, crappie, baitfish, catfish, and more. While not every title we publish becomes a New York Times bestseller or a national bestseller, we are committed to publishing books on subjects that are sometimes overlooked by other publishers and to authors whose work might not otherwise find a home.

Henry Hughes: Henry Hughes grew up on Long Island, New York, and has lived in Oregon since 2002. His poems and essays have been featured in Antioch Review, Carolina Quarterly, Shenandoah, Seattle Review, Gray’s Sporting Journal, and Harvard Review. He is the author of three collections of poetry, including Men Holding Eggs and Moist Meridian, and the editor of the Everyman’s Library anthologies The Art of Angling: Poems about Fishing and Fishing Stories. Hughes is a professor of literature and writing at Western Oregon University and resides in Monmouth, Oregon.