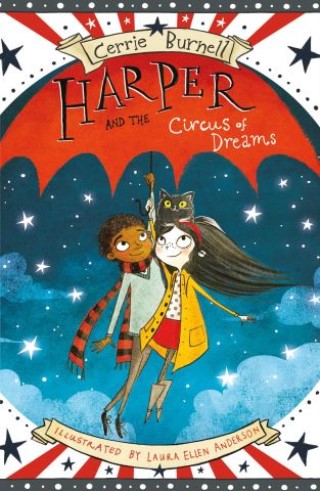 Harper and the Circus of Dreams

Late one evening as the stars begin to twinkle, Harper and her friends are flying on the scarlet umbrella when they see a girl running on air, skipping along a tightrope. She leads them to the Circus of Dreams, suspended in the air by hot air balloons.

There, they meet the mermaid acrobat, the spectacular circus baker, the mysterious fortune teller and the acrobatics troupe, all more spectacular than one could dream.

But as they learn more about the Circus of Dreams, Harper learns a secret about her past that is more than magic. . . .

Harper and the Circus of Dreams continues the adventures of Harper and her friends in a magical mystery like no other. An enchanting story of friendship, music, and magic featuring a diverse cast, brought to life through stunning illustrations, this is a book to be shared and treasured.

Cerrie Burnell: Cerrie Burnell is a presenter, actress, and writer, best known for her work in British children’s TV. She was featured in the Guardian’s 2011 list of the one hundred most inspirational women. She divides her time between London and Manchester, England.Laura Ellen Anderson has been a children’s book illustrator since graduating from the University of Falmouth. She is the creator of the Evil Emperor Penguin comic and the illustrator for many books including the Witch Wars series. She lives in the United Kingdom.