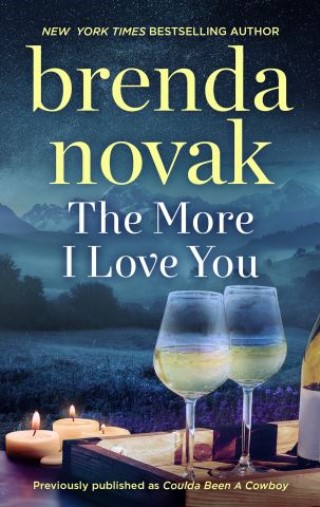 The More I Love You

Originally published as Coulda Been A Cowboy, this refreshing story shows that even the bumpiest roads are worth traveling for the right person.

Grandpa Garnier used to say, Love is like a bucking bronco. It takes guts and determination to hang on, but it’s worth the ride.

If only Grandpa was around now to help Tyson Garnier out of this mess. The famous pro football player is suddenly saddled with a very public scandal—and an illegitimate child. Tyson needs a good nanny now if he’s going to salvage his career. And plain, no-nonsense Dakota Brown is the ideal candidate.

Dakota doesn’t care for football—or for a man who doesn’t seem to want his own son. But she needs this job, and that precious little baby needs her.

Originally published in 2007 under the title Coulda Been A Cowboy

Brenda Novak: New York Times bestselling author Brenda Novak has written over 60 novels. An eight-time Rita nominee, she's won The National Reader's Choice, The Bookseller's Best and other awards. She runs Brenda Novak for the Cure, a charity that has raised more than $2.5 million for diabetes research (her youngest son has this disease). She considers herself lucky to be a mother of five and married to the love of her life. www.brendanovak.com