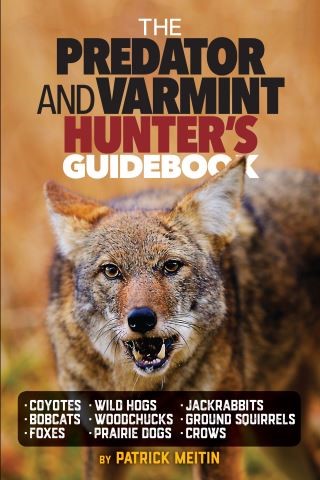 The Predator and Varmint Hunter's Guidebook

Tactics, skills and gear for successful predator and varmint hunting!

If you are interested at all in predator and varmint hunting--whether it's your first season, or your 50th season--this is the book you need!

Predators and varmints offer many fun and affordable ways to enjoy the shooting sports with almost year-round hunting opportunities. In an age of escalating costs and difficult access to quality big-game licenses and hunting properties, predator and varmint hunting keeps hunters and shooters engaged in their favorite pastimes. From small ground squirrels and prairie dogs to freezer-filling wild hogs and potentially lucrative coyotes and bobcats, nowhere else can the firearms enthusiast receive so much shooting opportunity.

The Guidebook will teach you about the many different varmints and predators available to hunt around the country, in addition to the best tactics, rifles, handguns, optics, ammunition and more, to employ for hunting success.

• Overview of the many species of varmints and predators in North America
• Proven hunting and shooting tactics for the most popular species
• Long-range shooting tips and tactics
• Insights into the rifles, handguns, gear and optics used by top predator and varmint hunters, including suppressors and airguns
• In-depth discussion of the best cartridges for predator and varmint hunting
• Expert advice on handloading many popular cartridges
• Equipment directory featuring the latest hunting and shooting gear

Patrick Meitin: Patrick Meitin was born and raised in the American West, was taught to safely shoot firearms at the age of 8, and hunting and reloading soon followed as a teenager. Trapping and predator hunting payed the bills after high school, and although his passion for big-game hunting eventually changed to the use of bows and arrows, his pursuit of varmints and predators with firearms has paralleled his intense pursuit of archery. Precision long-range shooting and handloading ammunition remain his focus, as well as tinkering with several firearm combinations to pursue performance. Meitin has written thousands of articles for numerous publications including Deer & Deer Hunting, Peterson's Bowhunting, Outdoor Life and more, and is the author of three previous books: Bowhunters' Digest 6th Edition, Bowhunting Modern Elk and The Bowhunter's Guide to Better Shooting.