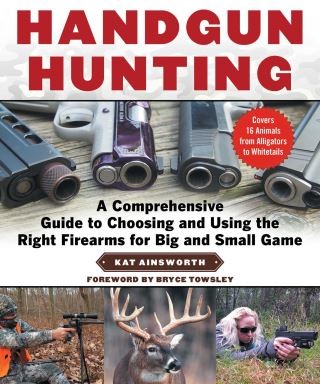 A Go-To Manual for One of the Fastest Growing Shooting Sports, With Invaluable Information for Both Newbies and Seasoned Hunters

Hunting with handguns has seen a huge growth in popularity in recent years, with hunters from all walks of life picking up the sport. In Handgun Hunting, author Kat Ainsworth examines all the game one can hunt in North America, from bears and deer to rabbits and coyotes. In each chapter, she touches upon such topics as:

Aside from analyzing each game animal and the tactics required to take it, Ainsworth gets into skills and drills, care and maintenance of the different platforms, plus the pros and cons of various holsters and scabbards. There is also advice on building your own handguns and creating your own loads; it is easier than many people think! With information useful to beginners and veterans alike, Handgun Hunting sets the new standard for this challenging sport.

Kat Ainsworth: Kat Ainsworth is a seasoned hunter and somewhat zealous tactician with a penchant for big bores. Her written work can be found both online and in print in a wide variety of industry publications. Prior to her years in the gun industry, she worked in emergency veterinary medicine and even trained as a farrier during her undergraduate work. Kat can be found hunting everything from feral hogs to pheasants but is also regularly at the range honing Mozambique drills and shoot-and-move techniques. She is equally at home talking tactics and trauma triage as she is run-and-gunning turkeys.Bryce M. Towsley is an award-winning writer and photographer whose work covers a wide variety of subjects, but he mostly specializes in the fields of hunting and firearms. He has published six books on guns, gunsmithing, and hunting. Towsley is a field editor for the NRA’s American Rifleman, American Hunter, and Shooting Illustrated magazines. He is also a columnist for Gun Digest. Towsley appears regularly on American Rifleman Television.